While Alicia Keys is celebrating the 10 year anniversary of her first album release, “Songs in A Minor” (I still remember the first time I saw her music video for “Fallin’”!), and has been seen around NYC with her husband Swizz Beatz and their baby Egypt, she maintains focus on one of her figurative babies – Keep a Child Alive. (http://www.keepachildalive.org) 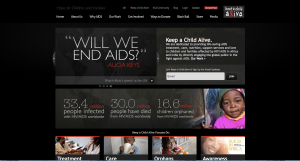 Alicia Keys is Co-founder and Global Ambassador to the organization, whose mission is “providing life-saving AIDS treatment, care, nutrition, support services and love to children and families affected by HIV/AIDS in Africa and India by directly engaging the global public in the fight against AIDS.”

Alicia Keys spoke at the United Nations in New York City on June 7th, 2011. The conference on AIDS was called “HIV Priorities for Positive Change: In Women’s Words”.