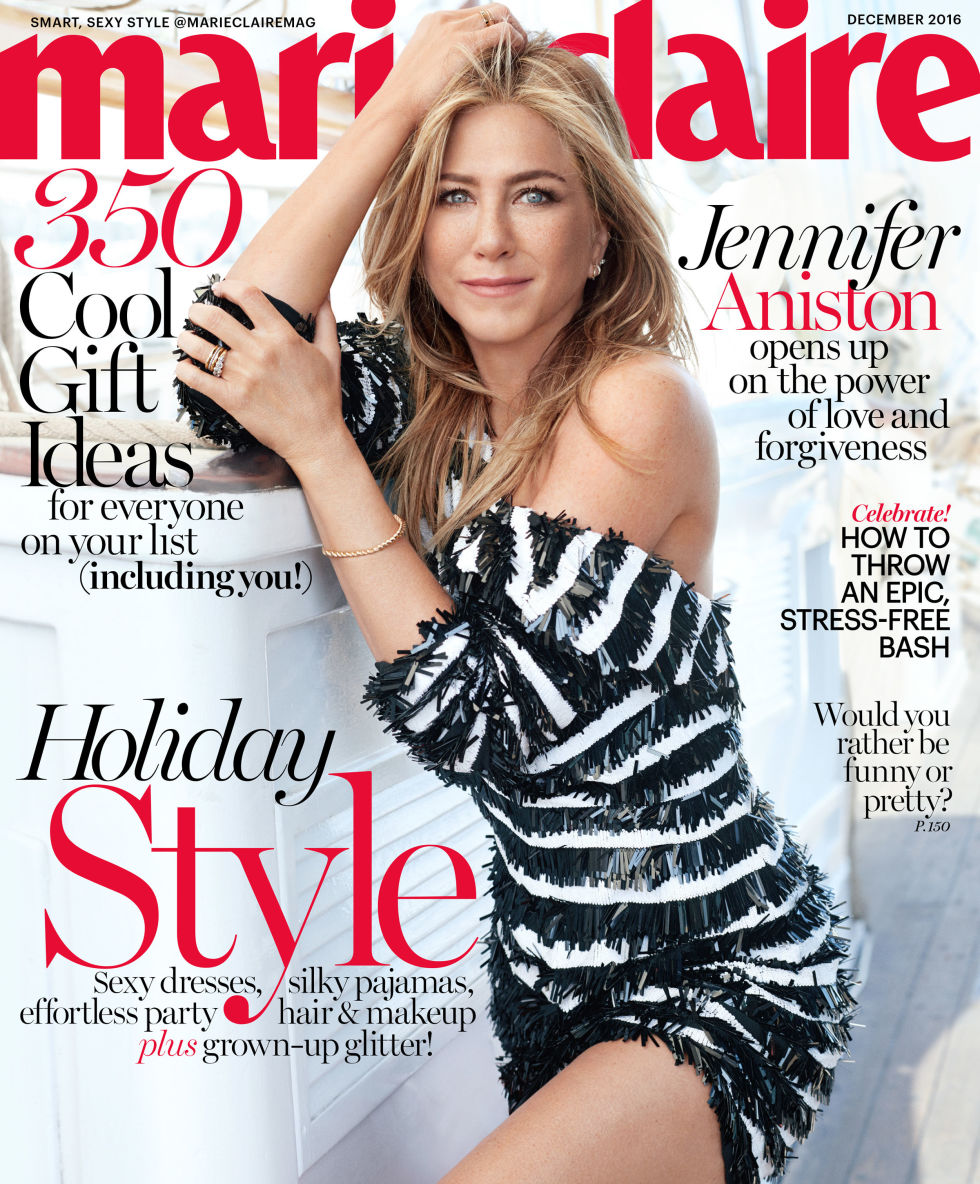 Jennifer Aniston graces the cover of Marie Claire Magazine’s December 2016 issue. Jennifer talks about the power of love, forgiveness and how she handles fame. Aniston also addressed her summertime Huffington Post Op-Ed piece and why she is fed up.

“My marital status has been shamed; my divorce status was shamed; my lack of a mate had been shamed; my nipples have been shamed,” she told Marie Claire. “It’s like, ‘Why are we only looking at women through this particular lens of picking us apart? Why are we listening to it?'” She continued, “I just thought, ‘I have worked too hard in this life and this career to be whittled down to a sad, childless human.'”

An important piece, especially in a day of media scrutiny, shaming and bullying, an excerpt from the Huffington Post Op-Ed that jumped out to Celebrity Optimist was when Jennifer wrote, “If I am some kind of symbol to some people out there, then clearly I am an example of the lens through which we, as a society, view our mothers, daughters, sisters, wives, female friends and colleagues. The objectification and scrutiny we put women through is absurd and disturbing. The way I am portrayed by the media is simply a reflection of how we see and portray women in general, measured against some warped standard of beauty. Sometimes cultural standards just need a different perspective so we can see them for what they really are — a collective acceptance… a subconscious agreement. We are in charge of our agreement. Little girls everywhere are absorbing our agreement, passive or otherwise. And it begins early. The message that girls are not pretty unless they’re incredibly thin, that they’re not worthy of our attention unless they look like a supermodel or an actress on the cover of a magazine is something we’re all willingly buying into. This conditioning is something girls then carry into womanhood. We use celebrity “news” to perpetuate this dehumanizing view of females, focused solely on one’s physical appearance, which tabloids turn into a sporting event of speculation. Is she pregnant? Is she eating too much? Has she let herself go? Is her marriage on the rocks because the camera detects some physical “imperfection”?”

In another paragraph, she captured the root of the issues when she expressed, “This past month in particular has illuminated for me how much we define a woman’s value based on her marital and maternal status. The sheer amount of resources being spent right now by press trying to simply uncover whether or not I am pregnant (for the bajillionth time… but who’s counting) points to the perpetuation of this notion that women are somehow incomplete, unsuccessful, or unhappy if they’re not married with children. In this last boring news cycle about my personal life there have been mass shootings, wildfires, major decisions by the Supreme Court, an upcoming election, and any number of more newsworthy issues that ‘journalists’ could dedicate their resources towards.”